Growing inequality in China is shaped by the housing markets

The Chinese economy as a whole has grown massively in the last 40 years, but it did not benefit the complete population equally resulting in increased inequality and potential social tensions. A novel research paper shows that the housing markets are key to understanding this trend (Fischer, 2022). High housing prices in the prosperous urban areas hinder the internal migration that would allow workers to move from the less developed rural areas to the urban economic centers and hence to benefit from the overall growth trend. Moreover, rising housing prices increase inequality also within the city between migrants who rent apartments and their landlords. A model predicts that the pathway of future inequality will, to a large extent, be shaped by the housing markets. 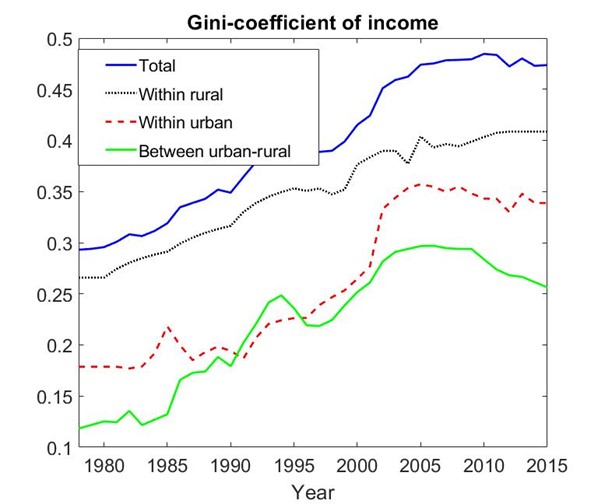 The Chinese economy has exhibited an extraordinarily rapid economic transition within the last 40 years, becoming the second largest economy in 2010 in terms of aggregate economic output, just lagging behind the USA. While on the aggregate this is very impressive, it does not tell how this growth dividend is shared among the population. Indeed, Figure 1 shows that total income inequality in China has been increasing. Starting from low levels of inequality similar to Scandinavian countries, in recent years inequality is approaching the high level currently observed in the USA. The ruling Communist party under President Xi Jinping has publicly stated its discontent with this trend (The Economist, 2021), but in order to address it one needs to understand its origins. 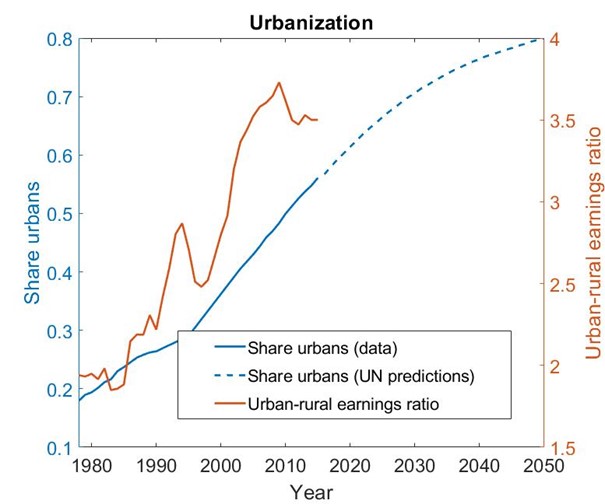 Figure 1 also decomposes income inequality. Inequality in China used to be dominated by a gap between the urban and the rural areas: a between-area inequality (Shorrocks and Wan, 2005). Similar to many other economies in the past, the Chinese growth miracle was accompanied by a sectoral transformation from a mainly agrarian to an economy dominated by the manufacturing sector. This transformation was accompanied by migration from the rural inland provinces to the urban growth centers along the eastern coast. Urban workers have more than double the earnings than their rural counterparts with the trend increasing (Figure 2). The substantial urban-rural earnings gap makes it attractive to live in the urban areas and within-country migration has allowed a larger chunk of the population to participate in the growth of the manufacturing sector. Therefore, between-area inequality has been recently declining. On the other hand, the decomposition of inequality in panel (a) of Figure 1 shows that within-area inequality - in particular in the urban regions - has been on the rise. 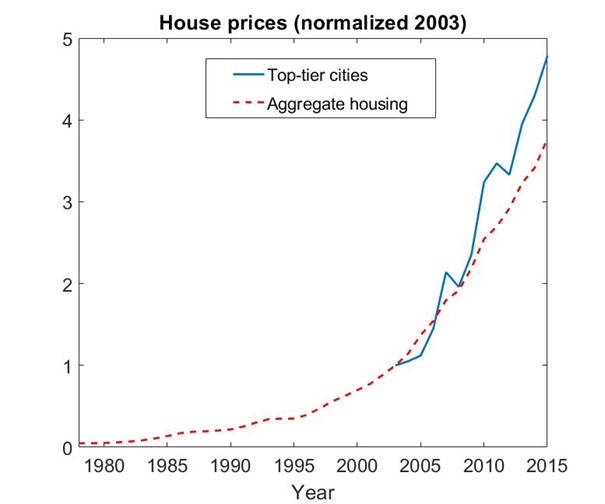 How does the housing market affect inequality?

In a new research paper, I argue that urban house prices play a crucial role in shaping these trends in inequality. China experienced a substantial house price boom especially in the urban centers (Figure 3). Using a theoretical model, the analysis shows that the pronounced migration from the rural areas exerts upward pressure on urban house prices. As a result, the increase in house prices constitutes a barrier to further urbanization and thereby influences the evolution of between-area inequality. Despite substantial income differentials between urban and rural areas, individuals do not migrate as the higher income is devoured by higher living costs (associated with rental housing in the urban areas). The model shows that this economic barrier now dominates and other legal and regulatory barriers under the direct control of the government have lost their importance.

The model also explains the rise in within-urban inequality. While in the urban areas those already lived there originally and domestic migrants share a place of residence, they are not equally well-off in terms of income and consumption. The urban natives rent out housing to the migrants. This constitutes an income to the landlords that also extends their consumption possibilities but reduces (non-housing) consumption of migrants. The model suggests that consumption inequality has increased even more than income inequality in the urban areas. In contrast to differential income differential consumption is very visible; especially if individuals live in the same city. As this might be a source of social tensions, the policy maker also cares about it.

Inequality in China is at the crossroads

The analysis also applies the model to make predictions for the future evolution of inequality. Kuznets’ (1955) famous hypothesis predicts that in the early stages of development both the overall level of income and its inequality increase. Once a certain threshold in the level of income is reached, this hypothesis promises that the increasing overall income will be shared in a more equal manner. Income inequality in China leveled out and seems to be at the crossroads. The model predicts that the urban-rural wage gap is on the decline, whereas the evolution of within-urban inequality depends crucially on the evolution of house prices. While income inequality is likely to decrease relative to its current levels, it will remain at high levels especially in the urban areas also associated with high levels of consumption inequality. From a policy perspective the results indicate that the trend towards more equalization can be accelerated by opening up the housing market, e.g., by reducing equity requirements easing financing of housing.

Shorrocks, A. and G. Wan (2005). Spatial decomposition of inequality. Journal of 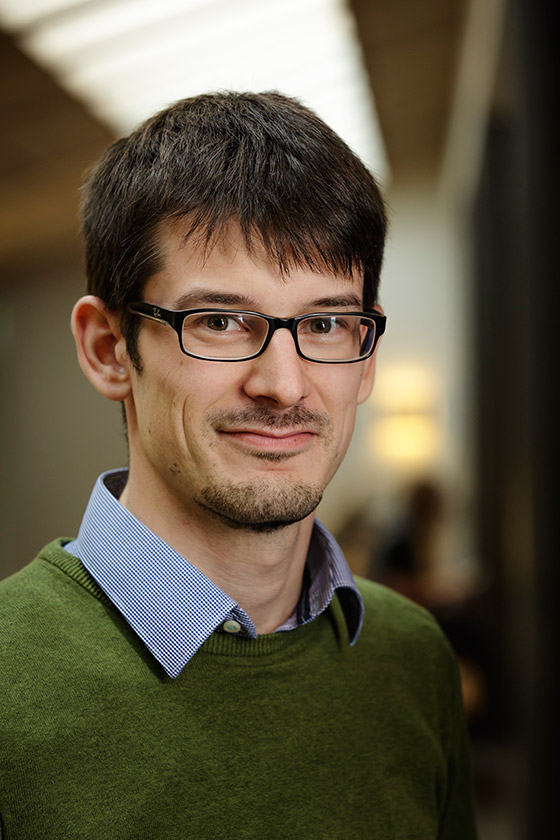